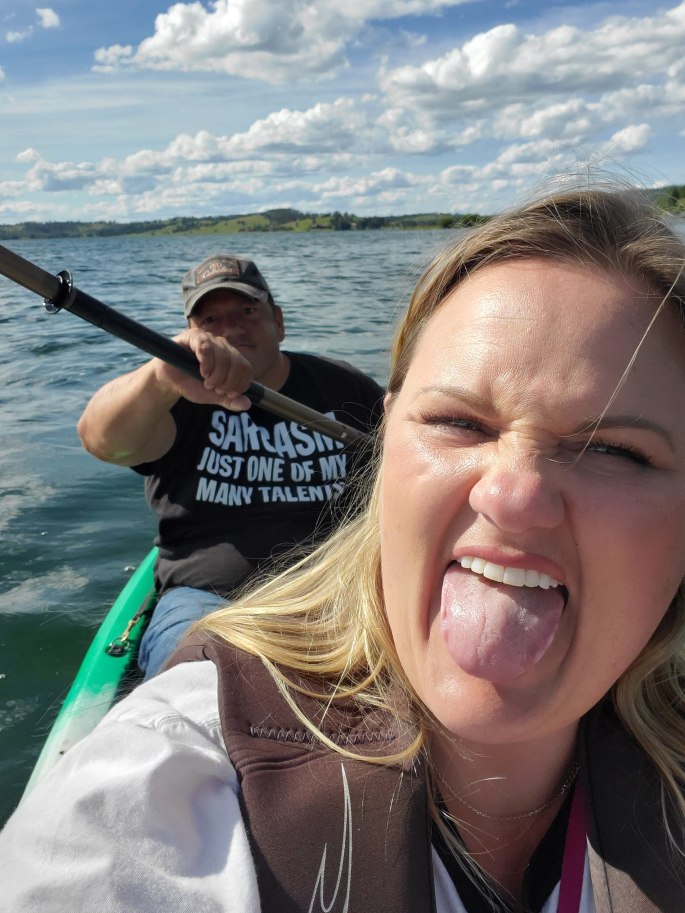 Anaconda is the place where the largest free-standing brick building in the world, and is actually about 300’ higher than the Washington Monument. One of the people we ran across said it’s so big that the inside of the top of the tower is big enough for a truck to drive around. We attempted to see it up close, but, like most of the things we wanted to see, we had to pay for a tour and it was closed when we were there (either after hours or due to COVID).

There was a viewing station and memorial area, where we could view the smelter stack through binoculars.

I had the kids all stand inside one of the crucibles to take a picture.

They wouldn’t look at me at the same time. For some reason the water at the bottom was freaking them out.

Then Eric came to my rescue and pulled his shirt up and flashed them his bare chest. They all looked. He’s so smart.

After the flashing, we read about the people and processes that made this place what it is today. Joe had to comment that the steel statue men had “ideal body proportions” with their lack of a neck.

And a replica diameter of the interior and exterior walls of the smelter stack. The interior was marked by a brick ring, and the outside of the sidewalk was how thick the smelter stack wall is. The interior had glittery black sand and we could feel the heat of the sun (baking heat ray things). All of a sudden, a teeny green grasshopper jumped from a rock, to the brick wall, and then into the hot black pit of sand. I was so worried that it was going to die a blistery hot death that Joe appeased me by making it his mission to save him.

Then we drove through Anaconda and stopped at an antique store calling our name. It was a hot spot pelt trading store at one point, so they had a TON of pelts and furs. Eric was rocking some raccoon hats and he made Jill wear a lynx (we think) coat. She at first was super squeamish and then after a lesson in sustainability and population control of hunting, she was a little better. I’m with ya, Jill…my meat comes from a store, not animals. 😉 Eric was rocking out. First with his original accordion song, and then some head banging with all the raccoon hats.

Joe and Ethan found an old typewriter and they immediately wanted it badly. They couldn’t afford it individually, so they pooled their money together and bought it together. The plan is, Joe wants to use it to type letters and Ethan wants to write his first novel, a WWII piece. Ethan also got a white vintage china teacup. They were both stoked about their finds.

We went on to Georgetown Lake, a glacial melt lake that rented kayaks, canoes, and paddle boards. At the marina, we hopped in our floating devices and started paddling. The kids were naturals, everyone was off and rocking the water.

We were about 45 minutes into our hour rental period, and we rounded up the kids to go inside. A larger boat came by and created big enough wake that Eric and my kayak started to tip over. Once we were sideways, I decided I decided not to fight the tip anymore and just bail. Eric yelled, “Nooooo!” and we were in the water. The water wasn’t the coldest either of us had ever been in, but snow melt water definitely takes a person’s breath away. The kids came to our rescue and helped us right side the boat. Except Gabe, he thought we had tipped for fun, so he also had tipped over. The only problem is, he couldn’t get his canoe right sided again, the front drain plug was missing. Thankfully, we were close to the dock, so Eric sent Gabe to swim to the dock and then Eric pulled the half full canoe to the back.