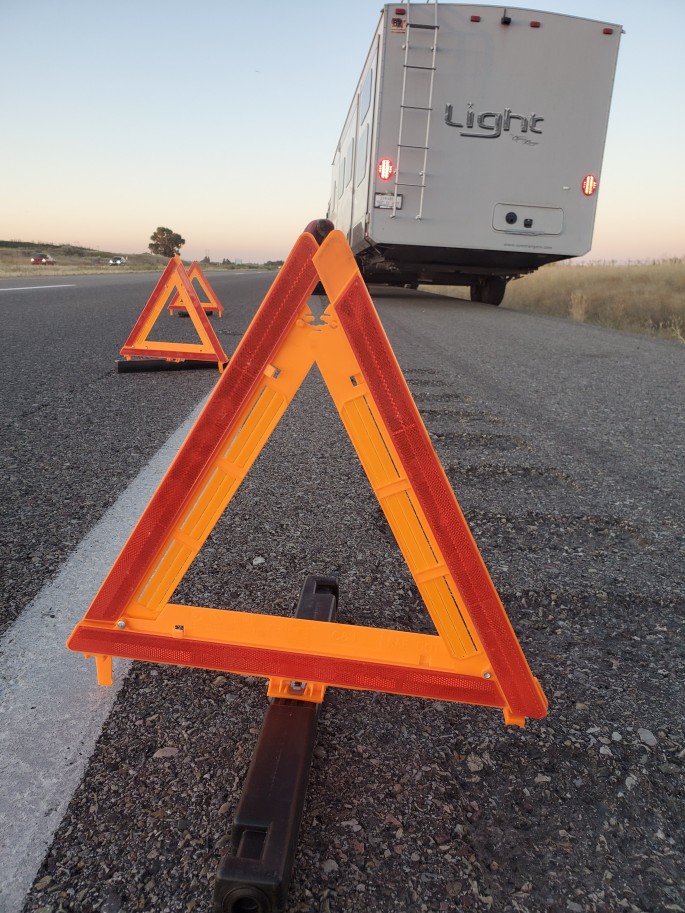 After Bonners Ferry, we were on a mission to make it South to meet Tiffany’s Dad and Chrisma at a lake and then to the Denver metro area for Tiffany to work and us to switch out summer stuff for winter stuff.

Our first stop was another fairgrounds in a place called Moscow, ID. It was a relatively quick and uneventful stay, but we did have a nice little bike ride to Idaho University. Tiffany thought the place felt like Hogwarts with its vividly colorful sunset and interesting architecture.

After Moscow we went to Boise and Idaho Falls, for one quick night each. We weren’t too impressed with those towns, so we quickly got out. On our way leaving Idaho Falls though, we went past Shoshone Falls. It was an oasis in the middle of a desert-like landscape and was a great place for a picnic and walk to break up the day’s drive.

Speaking of picnic, Tiffany has a “no eating in the car” preference. We stopped along the side of the road and she made peanut butter sandwiches for lunch. As she was putting everything away, her open-face sandwich slid down her arm, skidded on the stitching on the leather car seat and landed on the not-so-clean floor mat. Everyone got a good giggle out of the ironic karma of it all.

About 12 minutes from our destination for the night, we had another exciting tire blow out. It blew out on the couch slide side this time. Our poor Liberty looks like she’s been off-roading on some very low clearance trails. We need a giant band-aid. Eric got us all fixed up and back on the road. We’ve realized that duct tape really is quite the useful tool on the road.

The next day we landed at some National Forest Service land just outside The Grand Tetons. Gabe and Jill have a checklist of setting up and tearing down that they are getting very good at executing!

This little slice was a welcome sight after staying in what equated to parking lots for over a week. We had been irritable and tired and we realized part of it was that we had not been in nature for a while to recharge ourselves. We tend to be at peace spending our evenings stargazing and sleeping to the sound of rushing water from the river. We’re learning these little things about ourselves and it’ll be a guide for our adventures in the future.

This site was gorgeous, or as Jillian says, Goblin Core. The flowers and butterflies felt unreal, there were so many varieties of both!

Since it was a hot summer day, we went down to the river for a dip. It was so cold that it made our legs numb, so instead of swimming, we just waded.

Undesirable as it may be to him, Eric actually does need rest sometimes, so I begged him to do that while Jillian and I played in the water. He hides his stillness misery well.

After dinner, Eric held Jillian in his arms and they danced to music from our little boombox by the fire.

On our way out of the Tetons, we went down a steep 10% grade mountain and had our very first pull over to let the brakes cool moment. Chief and Liberty were fine, but the brakes were pungent. The view was worth it though, such a pretty drive. Those Tetons are definitely otherworldly.